Sviatoslav Vakarchuk: If we act the way we have been acting for the last 23 years, without caring about the fate of the people in the Donbass, we will change nothing 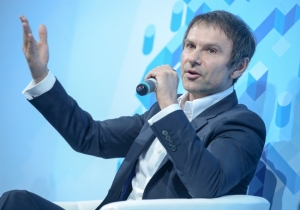 The political elites must listen to the people of the Donbas and pay attention to their fate in order to effect real, quality changes Ukrainian society, said popular singer Sviatoslav Vakarchuk at the opening reception of the 11th YES Annual Meeting in Kyiv.

“What have you all done? What have you done in 23 years to stop the situation that is happening today? You are absolutely right when you say that the people in the Donbas are living in disastrous conditions and that their mindset has been affected not only by the propaganda… Care should be taken of the people, of the people’s dignity. These people need a decent human future, but if we act the way we have been acting for 23 years, without caring about the fate of the people in the Donbas, we will change nothing”, said the singer, addressing head of the Donetsk Region State Administration, Serhiy Taruta.

Vakarchuk also said he believes it is possible to restore the infrastructure of the region and to stop the war, but he wonders how easy it will be to restore the faith of the population of Donbas, “that has been suffering ruin not just for the past couple of months, but for 23 years, when the political elites were doing nothing but using those people”.