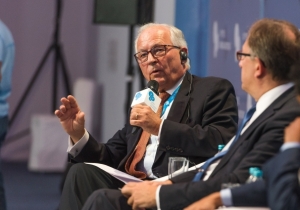 Ukraine's accession to NATO is impossible as long as there are hostilities in Donbas, the chairman of the Munich Security Conference, Professor at the Hertie School of Governance in Berlin and member of the YES Board, Wolfgang Ischinger, has said.

"I cannot see any possibility on the horizon for all NATO members to vote in favour of Ukraine's membership. There is no chance of this happening while there is gunfire in your country. People will be afraid to become, directly or indirectly, involved in this conflict," he said at the 14th Yalta European Strategy Annual Meeting, organized by the Victor Pinchuk Foundation.

Ischinger mentioned a simple test once used by NATO for candidate states, which, he said, Ukraine should measure itself against.

In Ischinger's opinion, Ukraine would fail this test now.

"Had we put this test to Ukraine, we would not have had three positive answers. You may have ended up three question marks. If you suggest that NATO member states seriously consider the issue of Ukraine's entry in the coming months or years, there will not be a consensus. Certainly, the key problem is the conflict which would have prompted many NATO members to say: if we accept Ukraine, we also inherit the problems with Russia!" he concluded.

Arseniy Yatsenyuk, former Prime Minister of Ukraine, countered: "Let us hold this test. First, does Ukrainian society support NATO membership? Yes. According to the latest polls, the majority support accession to NATO. It is simply impossible to have 100% on any issue. The question on will it ensure additional stability and security for NATO member states? The answer is yes. Ukraine has improved its armed forces and is the only country in the world to contain the the advancement of Russian troops. We are fighting for our independence and your security," he said.

The former Ukrainian prime minister also pointed out that it would be wrong to say that if NATO accepts Ukraine as its member, it will inherit its problems with Russia. "My friends, you already have problems with Russia! They interfere in your elections, they bribe journalists and politicians, shoot down MH17, and carry out cyber attacks. It is in your interests to accept Ukraine into NATO – the more of us are, the stronger we are!" he said.