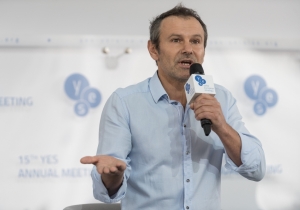 People that are truly trusted by society have to take power into their hands, co-founder of the Center for Economic Reforms, social activist and lead singer of Okean Elzy band, Svyatoslav Vakarchuk, has said. Vakarchuk was speaking at the 15th Yalta European Strategy (YES) Annual Meeting organized by the Victor Pinchuk Foundation.

“Today, courts are ‘absolutely trusted’ by one percent of population. Is this a normal situation?! And, plus or minus a small amount, only seven percent of population ‘more or less’ trust them. Do you believe old judges should have any moral right to chair the judicial system, is there any common sense in this? The patrol police reform was more or less successful because it was a brand new beginning. This is the approach we have to take on everything. People who are trusted by the society must take power into their hands”, Vakarchuk said.

When pressed by BBC HARDtalk Presenter, Stephen Sackur about plans to run for presidency in Ukraine, Vakarchuk responded: “What I really like about show-business is to keep people in suspense … sometimes the right time does not necessarily have to be at the YES conference, you may just come across someone on a street, talk to a person and make a decision during this conversation”, Vakarchuk cryptically added.