European Commission vice-president: our priority it to ensure gas transit across Ukraine after 2020 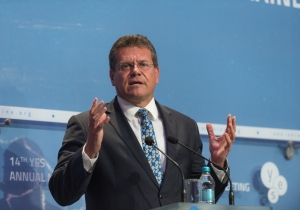 “Ukraine has a huge potential to become an energy hub. I must stress that continuing important gas transit across Ukraine after 2020 is a priority for the European Union,” Sefcovic continued.

Sefcovic noted that Ukraine had achieved notable progress in reforming its economy despite the difficult conditions caused by the war on its eastern border.

Sefcovic praised Ukraine’s progress in the reforming of its banking sector and shift to economic growth.

“The best answer to the situation in the east, the best recipe for success is to develop a strong democratic and prosperous Ukraine which can be a model to its neighbours,” Sefcovic concluded.