Vitaliy Klitschko: There Will Be Enough Votes to Change Ukrainian Constitution 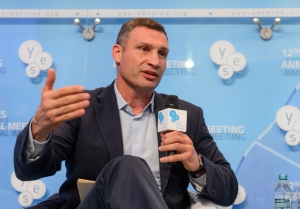 The mayor of Kyiv, Vitaliy Klitschko, is confident that there will be enough votes among the ministers of parliament who will support changes to the Constitution of Ukraine with regard to decentralization. Mayor Klitschko made this statement at the 12th Yalta European Strategy (YES) Annual Meeting today in Kyiv.

"Decentralization is an imperative of our time. We have success stories from such countries as Poland, Hungary and the Baltic countries which have completed decentralization,” he said. “We see how effective their societies are now… I am confident that if we revisit this issue in the second reading, there will certainly be 300 votes whereas what we have now rather looks like speculations on the eve of elections," he said.
Klitschko suggested that decentralization would allow cities, including Kiev, to solve their problems more efficiently. Another supporter of decentralization is Serhiy Lyovochkin, a deputy head of the Opposition Bloc party faction in parliament, who however thinks that the current wording of the constitutional amendments is wrong.
"Certainly, we support decentralization. However we do not support it in the wording presented in the bill which was put to vote in parliament. Why? Because it starts with an article saying that executive functions are carried out by prefects. Prefects, on their part, are nominated by the Cabinet of Ministers and appointed by the president of Ukraine. Where is the executive function of local self-government in this?" he asked. He added that his political force would insist on revisiting the bill before it is adopted into law.
Other panellist, Serhiy Taruta, a Ukrainian minister of parliament and former head of the Donetsk regional state administration (2014), regrets the bill on amendments to the constitution does not match some previously prepared drafts.
"There was a conference on 25 April 2014 to which we invited the representatives of local self-government from Donetsk, Luhansk, Volyn and Lviv regions. We have practically worked out and agreed a final draft on decentralization… Unfortunately, the model we agreed at the 25 April conference is different from the one heard in parliament. This caused a split," he concluded.

This news is avaliable now in Ukrainian.