TV-Link Participants at the 7th Yalta Annual Meeting: Recovery to Be Lasting 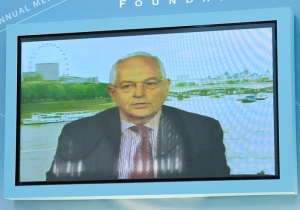 The world economy is in a traumatic condition. The recovery is going to be long-lasting and complicated. Martin Wolf, the Columnist of The Financial Times said this in the course of the 7th YES Yalta Forum TV-Link New York - Yalta.

The anti-recessionary measures taken at the start of the crisis – budget and fiscal aid - prevented the world from entering a deep recession, however the financial crisis led to the drastic consequences, he emphasized: “The financial crisis bestows hard inheritance: high unemployment rate, low economiс growth, and fiscal indebtedness. The process of recovery from crisis consequences is expected to be lasting”.

As explained by him, six world largest economies have GDP indices reduced and they have not managed to come to a post-recessionary level. Besides, they are expected to experience a long term restructuring of the financial sector. The developing economies such as China and India have been less affected by the crisis. Nevertheless, today new risks are emerging, in particular, the risks of “currency wars” between the USA, China and other countries.

Fred Bergsten, the Director of Peterson Institute for International Economics, envisages the “currency wars” risks as well. He thinks that today virtually all countries employ currency devaluation as a way to cope with the crisis. However, it is a mistake. “Every country wants their growth to be at the expense of export. But they do not think about the recovery programme profile. All of them want to name their rise as export. That is why, every country wants to have low exchange rate. But it is a danger. We should remember what happened in the ‘30s: the currency devaluation resulted in depression”. Besides, the simultaneous currency devaluation may provoke and has been provoking the international economical discord already, in particular, between the USA and China. One more risk of high importance, according Bergsten, lies in the governments' attempts at achieving rapid economical recovery by taking too hasty monetary steps.

However, Fred Bergsten is quite optimistic as regards the rates of global economical rise in the years of 2011-2012. In his opinion, the global economical growth will achieve the level of 4.5%. At the same time the indices will differ greatly in various regions of the world. The economy of the Asian countries will have an increase by 8% and even more, the Latin American countries – by 4-5%, the USA – by 3-3.5%. Western Europe and Japan will be the slowest among of them, having the level of 1-2%.