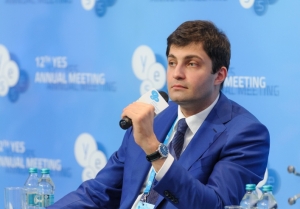 The General Prosecutor's Office of Ukraine is currently undergoing changes that have not been seen during the period of Ukraine's independence, according to Deputy Prosecutor General of Ukraine, Davit Sakvarelidze, at the 12th Yalta European Strategy (YES) Annual Meeting, taking place today in Kyiv.

"I'm not afraid to say that an internal “Maydan” [referring to Ukraine's revolution] is going on in the Prosecutor General's Office which we have never seen before. Political changes have reshaped the political structure, but the Prosecutor General's Office has not changed; the system has remained the same. Now we are trying to correct it," he said.
Sakvarelidze added that the Prosecutor General's Office is currently holding an open and transparent competition to select 700 people to fill leadership positions at the agency across the country, although the number of leadership positions has been significantly reduced.
"We do not think that everything will run smoothly. Many people have lost their jobs, many of them became millionaires in previous years. And many of them have close ties with politicians who are trying to support them, the oligarchs. But they need to take these tests and to stay in office or leave," he said.
The deputy prosecutor general noted that the current level of public confidence in the prosecution office is extremely low. "Among all institutions, confidence in courts and prosecutor's office is at the lowest level... We need effective systemic changes," he said.
Nonetheless, the Prosecutor General's Office has established a small department staffed with investigators with clean reputation which deals with investigation of corruption within the entire office. "Over three months, we have shown a very good result – seven or eight cases. We are conducting investigations against senior officials, which has never happened before. We have shown that there are no untouchables within the prosecution system," the deputy prosecutor general said.
Another panelist, member of the Ukrainian parliament, Serhiy Leshchenko, said that, despite Sakvarelidze’s remarks, the prosecutor's office lacks transparency. "The main problem is the lack of transparency and publicity. We are not receiving enough information about what is being done," he said.
During the discussion, Artem Sytnik, director of the National Anti-Corruption Bureau of Ukraine, also announced that active preparations are under way to launch his newly formed agency already in October.
"We already have 70 detectives at our bureau, the training ends in late September and we are ready to start work. The only thing that holds us back is the absence of an anti-corruption prosecutor," he said.
According to Sytnik, the National Anti-Corruption Bureau will be fully staffed by the end of the year, and its launch is vital for Ukraine. "If the anti-corruption bureau fails to work, if we do nothing with corruption, then Ukraine will cease to exist just in a year or in a year and half," he concluded.