The world is losing interest in the Ukrainian crisis, it is necessary to maintain EU unity and support, Aleksander Kwasniewski 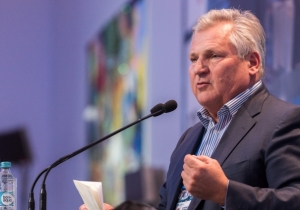 The world is losing interest in the Ukrainian crisis, so it is important to fight for the unity and support of the EU, the former president of the Republic of Poland (1995-2005) and chairman of the supervisory board of Yalta European Strategy (YES), Aleksander Kwasniewski, said in his closing remarks at the 13th YES Annual Meeting.

“The bad news is that we have less and less interest and energy amongst the allies of Ukraine, especially in the European Union and the United States. Because time is passing, we have new problems, and the news media has moved on to reporting different stories on their front pages, like North Korea, the American Election, etc. This is not good for Ukraine, we need to stay at the top of the agenda to maintain our international support, international understanding and international unity,” he said.

In Kwasniewski’s opinion, there is a threat that some EU countries’ positions may shift.

“I was very proud when I was here last year that the EU was so united in its response to  the Ukrainian crisis and Russia’s illegal annexation of Crimea, but I am very much afraid that if this crisis is frozen for years, we will have a problem keeping this European unity and theis common European approach and policy,” he added.

To ensure this doesn’t happen, it is important to repeatedly remind our partners what the Ukrainian crisis is about, he concluded.  “Ukraine is the test for the west, the Ukrainian crisis is the test for democratic forces in the world. By showing how much we support Ukraine, we show how much we want to fight for our fundamental values of democracy, sovereignty, independence and civil society”.