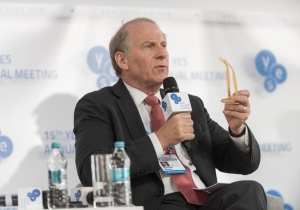 The aggression against Ukraine, one of the signatories to the Budapest Memorandum, undermines international non-proliferation efforts, President of the Council on Foreign Relations, Richard Haass has said.

“We analysts, do not think that North Korea will abandon its nuclear weapons, no matter what Donald Trump says, exactly because of the Ukrainian case. I am confident that North Korea will keep its nuclear weapons. We wanted to continue the non-proliferation policy but the Ukrainian case undermines all of these efforts,” he said at the 15th Yalta European Strategy (YES) Annual Meeting organized by the Victor Pinchuk Foundation.

According to Haass, because of the aggression against Ukraine, even countries which do not have nuclear weapons may consider acquiring them.