Ukrainian and Russian Wikipedia must work together, - Jimmy Wales 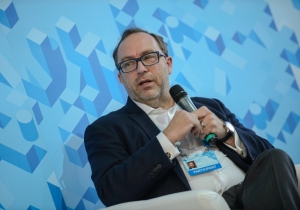 Ukrainian and Russian Wikipedia must cooperate despite the potent impact and control on the part of the Russia’s government. Jimmy Wales, the founder of Wikipedia and Wikimedia Foundation, voiced out this idea during the working dinner “Media and Digital Communications as a Tool in Revolutions and Wars: Information/Disinformation” at 11th YES Annual Meeting of Yalta European Strategy (YES) on Friday in Kyiv.

“We call upon Ukrainian Wikipedia writers to target both on-line and in physical environment the Russian speaking Wikipedia community in order to enable cooperation…so that Wikipedia remains the way of alternative views, alternative statements…”, - Wales accented.
The Wikipedia founder mentioned that the RF’s leadership-controlled Russian propaganda turns out to be far more efficient than the world community could have expected.
“We can see the weakness of the Russian model. There is very potent impact and control on the part of Russian government, they have stopped many mouths including the good journalists and independent mass media sources. The propaganda…goes top-down and is more efficient than we expected”, - noted Mr. Wales.