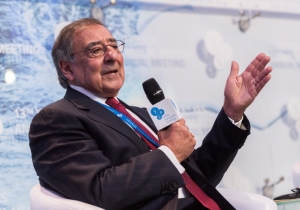 Ukraine should be provided with defensive weapons, and Russia should be dealt with from a position of strength, said the 23rd United States Secretary of Defence (2006-2011) Leon Panetta at the 13th Yalta European Strategy Annual Meeting (YES).

“I think it is very important for Ukraine to not only continue to strengthen its economy, and its government, but to also strengthen its military. The United States, obviously, along with NATO, is providing trainers, equipment, and training exercises. But I would take the  next step, and provide defensive weapons to Ukraine, to make very clear to Russia that if it tries  to do anything militarily, it will have to pay a price”, he said.

The former US Defence Secretary explained that for him a position of strength means a strong army, a strong diplomatic arm and united international efforts.

“We have to build strong alliances that make very clear to Russia that they are not just dealing with the United States or with Ukraine, but they are dealing with a coalition of Nations”, he concluded