Ukraine has to fight for the right to become a part of Europe, says Tony Blair 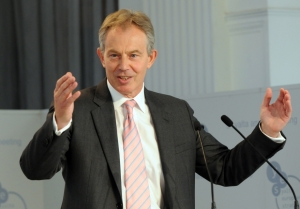 Globalization in the modern world changes the content of politics, the internal as well as the international ones. The divide between political forces and countries lies not in belonging to a certain ideological system, but in being open or closed for the global world.

This new direction in the global policy forces one to create a new vision of both European and Ukrainian problems. This has been stated by Anthony Charles Lynton "Tony" Blair, the British politician and public leader, the Prime Minister of the Great Britain in 1997-2007, in his report “Vision for Ukraine and Europe” on a special Plenary Session of the 5th annual Yalta European Strategy (YES) summit.
Globalization, Tony Blair thinks, is an objective and inevitable process, which in the modern world is driven by forces that are not the separate countries or blocks of states, but are the people themselves. “People are choosing something, and the world becomes open. That is why you cannot oppose anything. There will be some sort of a decisive battle, there will be some quiet periods; but this fate (globalization – YES) is inevitable”, emphasized the British politician. “Today’s challenges are global by nature, and either of the countries is not able to overcome them on its own. Energy and food crises or terrorism – we can get over them only acting together, working through the borders”.
The world, the birth of which wee witness, will not have any more superpowers, supposes Blair. “Within the next decades the USA will more and more be sharing its powerful status with China, India; in future, quite possibly, with Russia”, he admitted. Inside the EU, known to have a formal division on big and small countries, the fact is being realized that “big” EU countries are not that “big” in the global context.
The center of gravity in the modern world is shifting more and more to the East. That is why European Union should not stick to the policy of being a closed formation. “This is the change of policy in our societies. We have to be open and not close ourselves in our shells”, Tony Blair stressed. “In such a manner, the European Union has to become the symbol of this European policy”. Among the changes needed for the European Union in the given context there is, first of all, the ability to act collectively. That is, to make the common European market reality, liberalize the energy market, develop competition, and decrease regulation. And for Europe to establish itself, for it to become powerful and competitive, the Lisbon treaty is needed, helping Europe, among other things, to become more open.
These are the tasks Ukraine has to face. “From the very beginning I was advocating the perspective of Ukraine’s membership in the EU”, mentioned Tony Blair. “Whether she will be (the member of the EU – YES) or not, this shall be decided by agreements and negotiations; it shall depend on the predominant tendencies within the EU at the moment. Still, the destiny of Ukrainian integration into EU will not only be defined by agreements, but by Ukraine’s being able to demonstrate its attitude and its readiness. Should the country be open and wealthy, should it prove itself to be a true ally, the state will get itself into the European agenda”.
“It is not only Ukraine that needs Europe. Europe needs Ukraine as well”. Ukrainian ambitions to become the EU member by 2020 will not be easy to realize, but “you have to fight to become a part of Europe. And you have to see not a threat but a possibility in this fight”, emphasized Tony Blair.
As was informed, Yalta is hosting the the 5th annual summit of international Yalta European Strategy (YES) network, the greatest and the most influential non-governmental forum for Ukraine and European Union issues. More than 160 politicians, businessmen, public characters, diplomats and journalists from more than 20 countries of the world shall take part in the Summit. The Summit will continue working until July, 13. The Plenary Sessions will be traditionally held in Livadia Palace.
Among the participants of the 5th annual organization Summit are Dominique Strauss-Kahn, the Managing Director of the International Monetary Fund; Mikheil Saakashvili, the President of Georgia; Marek Siwiec, Vice President of the European Parliament; Aleksander Kwasniewski, the President of Poland in 1995-2005; Mario David, Vice-President of European People’s Party; Victor Chernomyrdin, Ambassador of the Russian Federation to Ukraine; key strategists of the leading USA political parties – Karl Rove, the republican, and Bob Shrum, the democrat.

Anthony Charles Lynton "Tony" Blair, the British politician and public leader, the Prime Minister of the Great Britain in 1997-2007, will be the special guest of the Summit to speak at Vision of Europe and Ukraine Plenary Session on July, 12.
The Ukrainian state at the Summit will be presented by Arseniy Yatseniuk, the Head of Verkhovna Rada of Ukraine; Raisa Bogatyrova, the Secretary of National Security and Defence Council of Ukraine; Vice Prime Minister on European and International Integration Grygoriy Nemyria.
Yalta European Strategy (YES) is an independent international organization, uniting the famous politicians, business and public opinion leaders, and journalists, with the aim of reforming Ukraine and provision of support to its entering the European Union. The organization was created by Victor Pinchuk, Ukrainian businessman and public figure, in July, 2004.
Annual YES Summits in Yalta act as communication ground to discuss and develop political and economic strategies for Europe and Ukraine. Since the year 2004, William J. Clinton, the 42nd President of the USA; Gerhard Shroeder, the German Chancellor (1998-2005); Aleksander Kwasniewski, President of Poland (1995-2005), Victor Yushchenko, the President of Ukraine, and other personalities took part in Summits’ work.
Besides annual summits, YES acts as initiator and organizer of public opinion surveys, forums and discussions on actual Ukraine-European Union relations issues, provides public opinion polls in EU countries concerning the European integration perspectives of Ukraine.