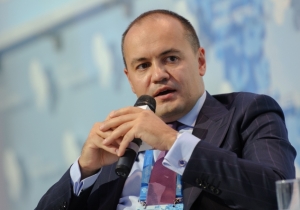 Ukraine will be able to survive the heating season if it uses the truce in the Ukraine-Russia conflict in the country’s east to rehabilitate its infrastructure, stated Maxim Timchenko, the Chief Executive Officer and Chairman of the Management Board, DTEK, at the session “Energy Security: Now a Question of Life and Death” at 11th Annual Meeting of the Yalta European Strategy (YES) on Friday in Kyiv.

Timchenko mentioned that Ukraine depends not only on Russian gas, but also on Russian coal and electricity. The situation, in his opinion, may be resolved by two methods: to import monthly millions of tons of coal from external sources: half may be delivered from Australia and South Africa, the other half may be bought from the RF; while there is no choice speaking of the electricity, it can be bought only from Russia.
The other way, in Timchenko’s opinion, the best for the entire Ukraine, is to extend the truce in order to reach the peaceful solution of the conflict and to use this break to rehabilitate the infrastructure: railways, motor ways, etc. Nowadays, either the mines do not operate, or the coal can’t be supplied to the power plants, as the ways are destroyed due to the war in the East. “During the recent week we started to transship the coal to the power plants and we have already accumulated the resource equal to one million tons. If we manage to deliver it by railway, we’ll be able to survive the winter”, stated the Head of DTEK.
The Minister of Energy and Coal Industry of Ukraine Yuriy Prodan, who partook in the discussion, told if the reverse was ensured, Ukraine would be able to survive the winter. “The situation is difficult, but Ukraine has the plan for crisis recovery. Ukraine goes the way of reforming the energy industry”, - he said.
The Minister added that joining the efforts with the European partners, Ukraine will be able to ensure not only its domestic energy security, but also the security of the European Union. “If everyone remains face to face with a monopolist having significant strategic resources than death would come earlier or later, however individually”, – emphasized Prodan.