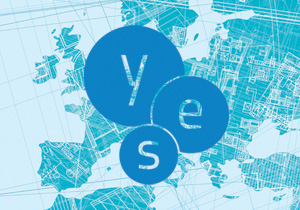 Ukraine is on the way towards European integration, and at the same time we don’t reject cooperation with our neighbour – Russia, declared President of the state of Ukraine Viktor Yanukovych, at the 10th Yalta Annual Meeting “Changing Ukraine in a Changing World: Factors of Success”, which opened on Friday in the Livadia Palace, Crimea.

Ukraine is on the way towards European integration, and at the same time we don’t reject cooperation with our neighbour – Russia, declared President of the state of Ukraine Viktor Yanukovych, at the 10th Yalta Annual Meeting “Changing Ukraine in a Changing World: Factors of Success”, which opened on Friday in the Livadia Palace, Crimea.

Ukraine lies between two large monsters – the European Union and Russia – and we feel this fact every day. I am very thankful to our partners both from the European Union and Russia for understanding this issue. We have never wished, and will not now begin, to contrast the “West – East” integration processes – as we strive to join them. As we move toward  closer integration, Ukraine is confidently adopting  greater modernisation, and is creating  favourable conditions for doing business.  This process unites us all more and more closely so that we will eventually form a single economic space from Vancouver to Vladivostok. We can achieve this with our joint efforts,” Yanukovych said.

According to the country’s leader, in associating with EU, Ukraine should not go to extremes and abandon cooperation with the Russian Federation.

Yanukovych noted that the dialogue with Russia on Ukraine’s participation within the framework of the Customs Union of Russia, Belarus and Kazakhstan and Single Economic Space will continue to the extent it is not inconsistent with WTO regulations,  EU standards, and its own national interests. “(Ukraine can) join to the extent that meets our national interests, it is necessary so that we further proceed on the way of integration. I am sure that Russia will also align more closely with European standards,” Yanukovych said.

President of Ukraine Viktor Yanukovych and President of the Republic of Lithuania
Dalia Grybauskaitė officially opened the 10th Yalta Annual Meeting on September 20th. They presented their visions on how to create synergies for Wider Europe.

The 10th Yalta Annual Meeting will focus on factors of success that create strong, competitive, sustainable and fair countries and societies. Among the topics will be the global economy, energy security, threats and innovations transforming our lives, as well as successful leadership approaches. Special attention will be paid to the future of Wider Europe and Ukraine’s cooperation and integration perspectives.

The 10th Yalta Annual Meeting is streamed live at korrespondent.net and
yes-ukraine.org in English and Ukrainian on September 20th and 21st.