Ukraine is now the main priority for the EU - Petro Poroshenko 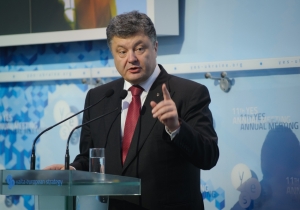 The European Union is showing its unity and solidarity with Ukraine, despite its own domestic political problems, witnessing thus the priority of the Ukrainian issue for the European community. This opinion was expressed by Ukrainian President Petro Poroshenko at the official opening of the 11th Annual Meeting of the Yalta European Strategy (YES) in Kyiv.

“I am fully confident that the country is starting to be more democratic, we have more freedom, we have far better relations with our partners in the European Union… And even the yesterday’s decision, at the very difficult moment when the European Union has found an opportunity to show its unity  and to show its solidarity with Ukraine, at a time when they have lots of their own challenges, this is an indicator to which extent Ukraine is close to them, for every leader, for every European country who have their own internal political problems. They show now that Ukraine is their main priority”, stressed the President.
He expressed his confidence that Ukraine will be able to return Crimea and to overcome the crisis in the eastern regions of the country, not even in a way of an armed confrontation, but thanks to the improvement of the standards of living of Ukrainians.
“They say that we have lost Crimea, no. We have an invasion in Crimea, but Crimea will be back with us again. It is not necessary even to use military means, I am sure that we will win the economic, democratic, liberal competition for the sentiments of the Crimean people. And the standards of living in Ukraine beyond the administrative border with the Crimean peninsula will be much better, and this is the only way to win the battle for the sentiments of the inhabitants of Crimea. And it is exactly the same way to solve the crisis in the Eastern Ukraine”, believes Poroshenko.

Yalta European Strategy (YES) is the leading public diplomacy platform in Eastern Europe to develop strategies for Ukraine and Wider Europe and promote Ukraine’s European integration. YES was established in 2004 by Ukrainian businessman and public figure Victor Pinchuk and is led by a distinguished board including President of Poland (1995-2005) Aleksander Kwasniewski, former Secretary General of NATO (1995-1999) and EU High Representative for Foreign and Security Policy (1999-2009) Javier Solana, and others.
The official Twitter of the 11th YES Annual Meeting: @YES_Ukraine,  Hashtag: #YESUkraine2014