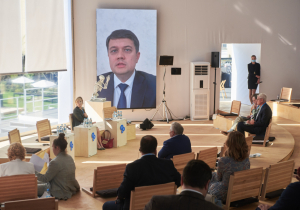 The Verkhovna Rada of Ukraine has to take into account the position of the Venice Commission regarding the law on de-oligarchization compliance with provisions of the Constitution and international law, said Dmytro Razumkov, Chairman of the Verkhovna Rada of Ukraine, at the YES Brainstorming, organised by the Yalta European Strategy (YES) in partnership with the Victor Pinchuk Foundation.

“The law on so-called de-oligarchization raises many discussions. Neither myself, nor the opposition, the government, and I’m certain the international community, have any doubts in the Venice Commission’s maximum objectivity. This is going to be a good argument to justify all our intentions and to implement this reform, or if there are any drawbacks, to remediate those in future to bring our legislation to the utmost quality and meet the Constitution and international principles”, Razumkov said.

Razumkov also said that he forwarded the said draft law to the Venice Commission after receiving a request from the parliament’s human rights commissioner and four opposition factions in parliament.

“I believe this is the right decision. This is for the first time when we see absolute unity among all the opposition factions in parliament in their request to the Chairman to submit a draft law to the Venice Commission”, Razumkov said.

Razumkov also said that to build a true rule-of-law state the law-making process shall unconditionally meet the principles of supremacy of the law.

“Often we have to explain both to people and ourselves why we sometimes choose a longer and more complicated, but certainly the right way. We would not be able to build a rule-of-law and democratic state where they truly respect human rights and freedoms if the government takes the other way. We can demand respect for the law from the society only by setting an example of our own”, Razumkov said in conclusion.