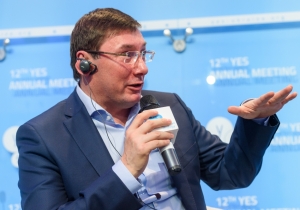 "We have to completely reboot the Ukrainian judiciary, and we should do this by suspending all current judges, and hiring via an open selection process, people who have university degrees in law, but no track record as judges," he said.

Lutsenko added that this reform would not be easy, and that mistakes would be made, but said that  today's "worthless" judiciary system left no other choice.

He also suggested that the establishment of the National Police should be sped up.

"The government plan was that the National Police would be created and its new chief appointed back in August. There is no chief as of yet. Without this person it is impossible to move on with the police reform. I insist that amid the current challenges, the National Police should be headed by a person who used to work in Western Europe or the US, who has relevant experience within an effective Western police institution and has no idea about the Ukrainian political and party systems. It is necessary to find such a person to achieve police independence from corruption," he said.

Lutsenko added that the crime rate in Ukraine is extremely high. "We said that we laid off 150,000 police, but we did not. In this situation, there is a new type of crime which has to do with people returning from the front with arms, old criminals and the not disbanded police. In every region there are groups consisting of 100 to 1000 people who have formed colossal crime rings and are now raiding businesses and posing a threat to public order in Ukraine," he said.

He emphasised that although a great deal of legislative work has been done to change the situation, it is still not enough. There is a need to speed up the practical enforcement of the new laws.

"We need to create a team which wants change, then to multiply that team and create a ‘team of teams’ to lead.  We have the first team already, these are 2,000 patrol police troops in one place and another 5,000 troops in four other cities. We have achieved this in just three months of work with a very limited budget and limited human resources. These are not simply poster boys and girls who you can have you photo taken with on the street. They have boosted the crime detection rate in every city by a multiple of three to four. This is true change," she concluded.

This news is avaliable only in Ukrainian.