Ukraine has to stop the Russian intervention without involving the US Army, - general Wesley Clark 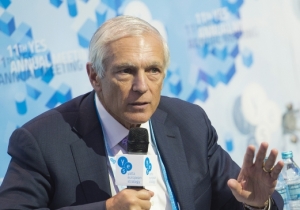 The United States of America will not wage a war against Russia for Ukraine, this country should stop the Russian intervention in the East itself, said Wesley Clark, US Armey general (retired), NATO Supreme Allied Commander (1997-2000), during the panel “War in Ukraine: Can It Become European? Global? And How Can We End It?” at the 11th Annual Meeting of Yalta European Strategy (YES) on Friday in Kyiv.

“Ukraine should solve its issues itself, there should be its leaders, the military should reorganize, Putin should ultimately find again common sense. Things should be told as they are at this forum: there is a war, there has been an incursion, regular Russian army was in the Eastern Ukraine, and prior to that, there had been artillery bombardments, air strikes, intrusions of helicopters. This is not a rebellion in Donetsk but a Russian intervention! And it should be stopped”, said Wesley Clark.
The US Army general also drew parallels between the actions of Vladimir Putin and Adolf Hitler.
Joschka Fischer German Foreign Minister and Vice-Chancellor (1998-2005) who also took part in the panel, sees the threat from the RF actions not only for the Ukrainian, but also for the European security, as Vladimir Putin seeks to establish a global superpower. “I believe that this is a mistake, but he is doing that”, said Joschka Fischer.