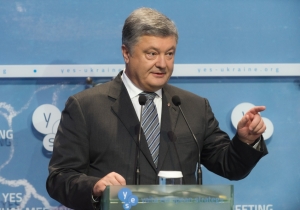 “Definitely, the situation with corruption has significantly improved. If you take any sphere of corruption, for example, energy and the purchase of gas from Russia. For almost two years, we have not bought a single cubic metre from Russia. We launched an efficient VAT refund mechanism. Yesterday, when I had a meeting with the business community, there was a completely different mood," the president said.

According to Poroshenko, he could see enthusiasm in the business community to invest in Ukraine.

“There is investment enthusiasm among businessmen, both local and international. They plan to increase their investments in Ukraine by up to 30%. All funds created to invest in Ukraine - there are five of them, as far as I remember - are full of investors,” Poroshenko revelead.

He also recalled that Ukraine had launched an e-declaration system. “We have launched the world’s biggest system of electronic declaration of income. About 1.2m people fill in their statements. This never happened anywhere in the world before, let alone in Ukraine,” he added.

Poroshenko praised the country’s new anti-corruption agencies for their work. High-ranking officials, including from the parliamentary majority, are being arrested on a weekly basis on suspicion of corruption, he noted.

The president expects the new Supreme Court to be introduced in the next year and the Anti-corruption Chamber to be established next month.

Aleksander Kwaśniewski
President of Poland (1995-2005); Chairman of the Board, YES, 12th YES Annual Meeting, 2015
«This will be our contribution to the political debate about the future of Europe, Ukraine and the world. We want everybody to hear our voice: we need a dialogue, we need peace, we are against violence.»