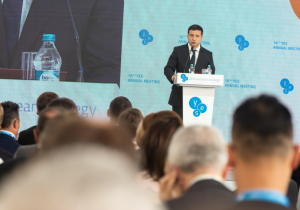 Ukraine is preparing for another exchange of hostages, and to disengage troops near the settlements of Petrivske and Zolote in the Donbass region, Ukrainian President Volodymyr Zelensky, said today. Zelensky made these remarks in his address to the 16th Yalta European Strategy (YES) Annual Meeting themed “Happiness Now. New Approaches for a World in Crisis” organised by the Victor Pinchuk Foundation.

“On 2 September, thank God, we had a Normandy format meeting in which we discussed the procedure for the cessation of war and the return of captives. Now we are entering talks about the next phase, we are preparing more lists and looking at the next phase of exchange. This is what we are going to negotiate both in Minsk and within the Normandy process”, Zelensky said.

He added that Ukraine is preparing to disengage troops near the settlements of Petrivske and Zolote in the Donbass region.

“As far as disengaging of troops is concerned. Yes, we disengaged troops near Stanytsya Luhanska, there's a ceasefire, and we have started building bridges there. From the humanitarian standpoint this is the right thing to do. The next phase, specifically based on the Minsk agreements, is to disengage troops at Petrivske and Zolote. I believe we will come to an agreement on this issue within the next few weeks”, he stated.

Zelensky also said that he does not support proposals to deploy a peacekeeping mission along the separation line in the Donbass region.

“I view the issue of peacekeepers very cautiously. I know that the former government discussed deploying a peacekeeping mission. I do not want to end up with an Abkhazia or Transnistria scenario at Donbass, with ‘peacekeepers’ standing along the separation line and never leaving. I am very cautious about this subject. To be honest with you, I have not yet raised the issue of peacekeepers, and, we do not plan to raise it with Leonid Kuchma at the Minsk talks. However, I would be happy if peacekeepers appear at the border between Ukraine and Russia. Please, they are welcome to go there, this is where we would like to see the peacekeeping mission”, - Zelensky said in conclusion.