Ukraine has become the latest “front line” in Europe's long-running struggle for freedom, argues the UK’s Minister of State for Europe 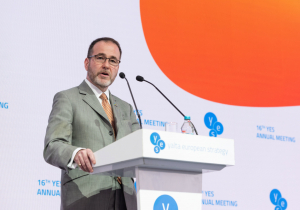 Ukraine has become the latest “front line” in Europe's long-running struggle for freedom, security and democracy, Christopher Pincher, UK Minister of State for Europe said at the 16th YES Annual Meeting “Happiness Now. New Approaches for a World in Crisis” organised by the Victor Pinchuk Foundation.

“Russia's attempts to lock down Ukraine within its sphere of influence bring us back to the very unhappy and dark times that we considered to be a tribute in history books. To me, this means that Ukraine has become the latest frontline in Europe's long-running struggle for freedom, democracy, and security. When I was a student, that front line was in West Germany and on the borders of Austria, while today it is Ukraine,” he said.

According to the UK Minister of State for Europe, Ukraine demonstrates that democratic values ​​need to be constantly protected. “Ukraine proves that we cannot take democratic freedoms as a given – these values ​​require constant vigilance to be safe from sabotage and subversion,” he added.

Pincher assured that the UK government will continue to support Ukraine in its fight for freedom and democratic values.