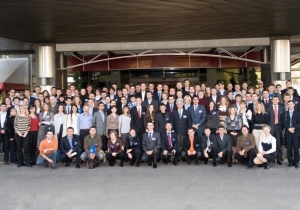 The 2nd YES University, forum of the young political leaders of Europe held in Kyiv on October 2-4, has adjourned its work.

The event was organized within the framework of the Program Yalta European Strategy under auspices of Victor Pinchuk Foundation. The objective of the forum was to search for, train and support young pro-European political leaders of Ukraine; to establish contacts between them and their European counterparts; to promote Ukraine and its political future in the European community.

The forum of 2008 brought together about 180 representatives of the youth organizations of three leading political forces of Europe - European People's Party, European socialists and liberals and the young leaders of Ukraine. Ukrainian party was represented by such youth wings of political parties as Union of Youth of Regions of Ukraine, Youth Union of "Our Ukraine", Union of Young Socialists, Ukrainian Students' Union, Motherland the Young, Democratic Alliance, Christian Democratic Youth Union, Young "Rukh", Ukrainian Youth "Sobor", Foundation of Regional Initiatives and others. Nearly 40 participants of the 2nd YES University do not belong to any political organization. These are young people of pro-active life stance who are directly involved in various social initiatives and processes. Overall, young politicians from 28 European countries participated in the forum.

The participants held heated debates on the issues crucial for Ukraine and EU, such as global problems of economy and energy sector, new configuration of the European community, current geopolitical situation and information wars, prospects of Ukraine's integration to Europe.

Opening ceremony of the forum was led by Mr. Steven Byers, Member of Parliament, UK, Chairman of the Board of YES; Mr. Mario David, Vice-president of the European People's Party and the YES University founder; and Mr. Victor Pinchuk, founder and Member of the Board of YES.

Major attention of participants and mass media was drawn to the plenary session "Are we back to Cold War?". Its panelists were Mr. Charles Tannock, Mrs. Nino Burdzhanadze, Mr. Aleksander Kwasniewski, Mr. Anatoliy Hrytsenko, and Mr. Sergey Glazyev.

Debating on probable recurrence of the Cold War, the panelists concurred that it would not look like in the late 20th century. More probable, they agreed, is "cold peace" (term coined by Charles Tannock). According to him, there are no pre-requisites for opposition of Russia and the West as the former is committed to develop constructive dialogue with the world, mould positive image for potential investors and enhance its competitiveness amid emerging new strong economies as China or India.

Not less captivating was panel "Media in Information Wars" featuring renowned Ukrainian journalists Mr. Oleksander Martynenko, Mr. Vitaly Portnikov, Mr. Vakhtang Kipiani, Mr. Iskander Khisamov and Mr. Yegor Sobolev. According to the panelists, press freedom should not be restricted. The only restricting factor could be professional journalism standards which ensure proper level of information content. It is freedom and impartiality of press that can guarantee security of the civilized society.

The second day of YES University 2008 was distinguished with Mr. Arseniy Yatseniuk's speech at the plenary session Generation Change in Politics. In his opinion, nowadays political elite is incapable of giving intense momentum to move forward since it inherited old Soviet system of views. Therefore, there is a need for the new generation of people who would bear responsibility for the future.

Plenary session of the third forum day "What are expectations of the new generation of political leaders?" was also devoted to discussion of the new generation of leaders. Mr. Mykhaylo Vynnytskiy, Head of Post Graduate Department of Kyiv-Mohyla Academy, acted as the panelist of the session.
Mr. Adrian Severin, Chairman of the Committee for Parliamentary Cooperation EU-Ukraine, was among the honourable guests of this day presenting his report Ukraine Today - EU Vision.

The plenary sessions were mingled with workshops when all the participants grouped under certain topics, prepared their proposals and reservations to present the results to public.The participants of the forum had an opportunity to enjoy the cultural program which included introduction of modern Ukrainian movies and visit to the PinchukArtCentre, one of the largest centers of contemporary art in Eastern and Central Europe, which currently displays new exhibition.