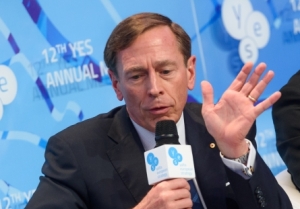 Both agreed the transformation of Ukraine’s ground forces army can expect to take a significant investment in time and resources, perhaps even several generations, according to Gen. Petraeus (U.S. Army, retired) and CIA Director (2011 –2012).
"It is very difficult to perform transformation of the army, and it is very long-lasting, painstaking work that requires development of leadership, education, courses, training for individual officers, and a doctrine. All this should be done. It is especially difficult to do it in a country which is fighting a war ... It cannot be done in a year or several years, it will take several generations," he said.
Another panelist, Gen Stanley McChrystal, (U.S. Army, retired) and U.S. Forces Commander in Afghanistan (2009-2010), agreed that the army transformation is a long process, and Ukraine has to take into account the military forces of its neighbour, Russia.
Stanley McChrystal also said that there must be a connection between the army and the people of Ukraine, projection of ideas present in the society in order to have the single course of development for the state.
Petraeus and McChrystal were joined by panellists Carl Bildt, former prime minister of Sweden (1991-1994); Yuriy Lutsenko, member of the parliament of Ukraine; Mustafa Nayyem, member of parliament of Ukraine; and Ekaterine Zguladze-Glucksmann, First Deputy Minister of Internal Affairs of Ukraine.

This news is avaliable only in Ukrainian.