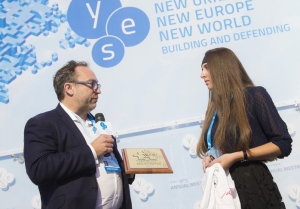 Inna, the sister of Igor Kostenko killed at Maidan and posthumously awarded the title of Wikipedist of the Year, got the diploma from the hands of Jimmy Wales, the founder of Wikipedia, at the 11th Annual Meeting of Yalta European Strategy (YES) on Saturday in Kyiv. Wales also presented to the sister of the killed a genuine Wikipedia T-shirt signed by the community members, those people who knew and loved Igor.

“This year our community had a great turn when we heard Igor Kostenko, who cooperated with Wikipedia, went to EuroMaidan and was killed there. This was a great tragedy. Igor was absolutely apolitical, if you see what he dealt with, this was history, sports”.
The Wikipedia’s founder emphasized Igor had worked much on the project to arrange a Wikipedia flash mob, “so that hundreds of people someday created more than a thousand entry articles”. “Unfortunately, this his action was to be cancelled as he had died earlier than we had the opportunity to implement it, however, the flash mob took place in April: over one thousand articles were created simultaneously, over two hundred people took part in it, it had a great influence on our community”, - noted Jimmy Wales.
Inna thanked the founder of Wikipeda and the organizers of 11th Annual Meeting of Yalta European Strategy (YES) for honoring her brother’s memory. “Thank you for your high appreciation of Igor’s work, his contribution to the formation to certain extent of public opinions, the development of Wikipedia. This way you cherish the memory in the hearts of Ukrainians and other people about Igor, the hero who gave his life for us to live, for Ukrainian nation to live and for Ukraine to live. And to live a decent life.”