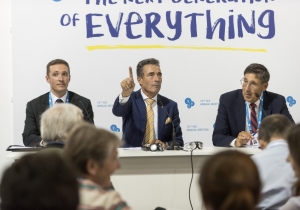 Kyiv, 14th September 2018 -- As Ukraine prepares for the second Presidential and Parliamentary elections since the Maydan revolution, three organizations have joined forces to help thwart outside efforts to subvert the democratic process.

The Atlantic Council’s Eurasia Center, the Victor Pinchuk Foundation and the Transatlantic Commission on Election Integrity today launched the ‘Ukraine Elections Task Force’ at the YES Conference in Kyiv.

The task force will consist of experts in disinformation, cyber security and hybrid warfare in Ukraine, Western Europe and the USA. They will monitor interference and sound the alarm bell – both with governments and the wider public – when they see meddling occurring.

Speaking at the announcement of this initiative at the YES Conference in Kyiv September 14, John Herbst, Director of the Eurasia Center at the Atlantic Council, said:

“Moscow has actively intervened in elections in the U.S., Europe and elsewhere in recent years. The Kremlin is gearing up to do the same in Ukraine’s March, 2019 Presidential election. Recognizing this, the Atlantic Council, the Pinchuk Foundation and the Transatlantic Commission on Election Integrity have put together an initiative to monitor, expose and counteract Kremlin interference in this election. This serves U.S. and Western interests in two ways. First, Ukraine is currently the principal focus of Moscow’s revisionist foreign policy.  Defeating Kremlin aggression in Ukraine – and preventing Moscow from destabilizing Ukraine by interfering in its election -- promotes stability in Europe and Eurasia.  Second, uncovering Kremlin tactics in Ukraine will help us defend against likely Kremlin interference in American and other European elections.”

Speaking at the launch during the 15th Yalta European Strategies annual meeting today, Anders Fogh Rasmussen, Co-chair of the Transatlantic Commission on Election Integrity, said: “Ukraine is ground zero in election interference. There is no doubt that Russia has a stake in next year’s elections where the choice is to stay the course on its reformist and western path, or to backslide. I have no doubt Moscow will deploy the full playbook of measures to spread confusion and fear: cyber-attacks, assassinations, disinformation, conventional attacks in Eastern Ukraine. We cannot allow this to happen. This is why our task force will work to help protect Ukraine from interference and raise awareness in the West about what the Kremlin is doing here. We will be politically neutral, but we intend to act as a referee to ensure that the playing field is fair, and to blow the whistle when we see outside interference happening.”

Speaking at the announcement of this initiative at the YES Conference, Victor Pinchuk, founder of the Victor Pinchuk Foundation, said: “At this 15th Annual Meeting we discuss the next generation of everything - the possibilities and the threats. Election meddling represents the crossroads of both. The next generation of meddling and disinformation technologies could dramatically harm the next generation of democracy and even Ukrainian statehood. Moreover, if we do not prevent it, what might happen in Ukraine in 2019, may also be repeated across the West in 2020. This is why it is extremely important to discuss these issues.”

The Atlantic Council Eurasia Center's mission is to enhance transatlantic cooperation in promoting stability, democratic values and prosperity in Eurasia, from Eastern Europe and Turkey in the West to the Caucasus, Russia and Central Asia in the East.

The Transatlantic Commission on Election Integrity (TCEI) is a transatlantic, bi-partisan group of political, tech, business and media leaders. Co-chaired by former NATO Chief Anders Fogh Rasmussen and former US Secretary for Homeland Security Michael Chertoff, It seeks to foster a more transatlantic and collective approach to preventing the next wave of election interference.

To stay in touch with the Task Force, sign up to the Atlantic Council’s ‘Ukraine Alert’ newsletter:http://www.atlanticcouncil.org/subscribe

And follow the Transatlantic Commission on Election Integrity by signing up to news from the Alliance of Democracies Foundation: http://www.allianceofdemocracies.org