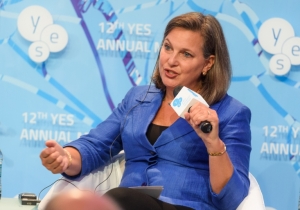 The United States will maintain sanctions against Russia until Ukraine's territorial integrity is restored, stated Victoria Nuland, Assistant Secretary of State for European and Eurasian Affairs at the United States Department of State, said at the 12th Yalta European Strategy (YES) Annual Meeting in Kyiv on Saturday.

"The sanctions will remain in place until such time as the Minsk agreements are implemented, and the sovereignty of Ukraine's borders is restored. Then we can begin lifting the sanctions," Nuland said during the panel discussion "Ukraine’s East and Crimea: Solving the Unsolvable."

Nuland also noted that if there are any further violations of the Minsk agreements, it may result in additional consequences for Russia. "And of course, we will work on the Crimea issue until Ukraine's sovereignty is restored there, too" she added.