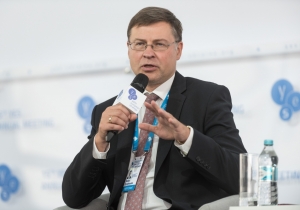 Reducing inequality in people’s personal income is an effective measure to fight a “wave of populism” seen around the globe, EC Vice President for Euro and Social Dialogue, Financial Stability, Financial Services and Capital Markets Union, Valdis Dombrovskis, has said.

- Why did it happen that today we are observing a wave of populism in Europe? We believe that income inequality is one of the components to work on. We came out of a huge crisis and still have to harvest social consequences of this crisis. Many people just do not see any benefit in globalization and economic development. That is why we have to concentrate upon fighting inequality, - Dombrovskis said. He was addressing the 15th Yalta European Strategy (YES) Annual Meeting “The Next Generation of Everything”, organized by the Victor Pinchuk Foundation.

Valdis Dombrovskis added that Europe’s economy demonstrates growth for the sixth year in a raw and it is very important that this is reflected on income of all layers of society.