The situation in Ukraine concerns all Europeans, – Martin Schulz 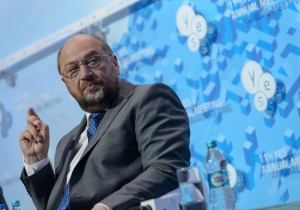 The situation in Ukraine concerns the whole European community. Russia should stop the provocations, intimidation and incursions not only in the territory of the Ukrainian State, but vis-à-vis the EU member States. This opinion was shared by President of the European Parliament Martin Schulz at the official opening of the 11th Annual Meeting of the Yalta European Strategy (YES) on Friday in Kyiv.

“What is happening in Ukraine concerns all Europeans… as we may not just stand aside and watch things that breach the principles of the international commonwealth… The rules of peace concern everybody, we cannot accept the way the larger countries intimidate smaller ones and introduce such an order when the international law is applicable to some, and is not to some others… Russia has to stop its provocations, intimidations and incursions in the territory of the European Union countries. One of the recent examples is the kidnapping of the Estonian policeman from the territory of Estonia”, stressed the President.

In Schulz’s opinion, a confrontation of the two systems of values has been occurring for the recent six months in the international politics: a world representing the ideals of democracy, rule of law, respect for the human dignity, and a world based on threatening and oppressing individual freedoms.

He said that Europeans do not accept the actions of Russia to escalate the conflict in Ukraine, however, the President noted that “the crisis could not be solved with military means, and all the parties should refrain from warmongering and from deploying inflammatory rhetoric”. Schulz is confident that in the context of the cease-fire declared, the EU should postpone new sanctions regarding the RF.

“Some like it, some don’t, but there will be no solution without Russia involved, there is no choice but to continue talking to Russia, obviously showing them clearly that the relations with Moscow would not return to the previously existing state as long as the crisis is not solved”.