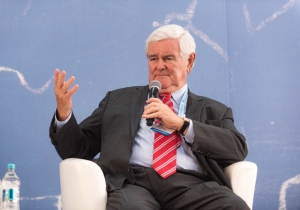 Russia will have to leave Donbass and Crimea, said the 50th Speaker of the US House of Representatives, Newt Gingrich, at the 14th Yalta European Strategy (YES) Annual Meeting, organised by the Victor Pinchuk Foundation.

"I have a feeling that the world will not step back. Putin’s personality is such that it is almost impossible for him to act other than in a hostile way. The pressure will be stronger, and there will be more waves of sanctions. Most likely, Ukraine will be provided with defensive weapons. All of that will increase the cost of confrontation for Putin. First, he will lose in the East of Ukraine, and then in Crimea", said Newt Gingrich.

The former Speaker of the US House of Representatives added: the aggression will not secure the grandeur sought by Russia, but instead, the isolation will grow and economic processes inside the country will be debilitating.

"This does not result in grandeur and it makes them more isolated. Maybe three, or maybe five years, left until the return of Ukraine’s East: there will be a moment when the isolation will become unbearable for Russia", Gingrich continued.

According to him, the Trump administration was hoping to improve relations with Russia but Vladimir Putin’s actions dispelled these hopes within a month.