Today the global risk level for Ukrainian economy is the highest throughout its history, say YES summit discussion participants 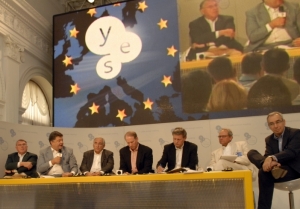 Today Ukraine is more involved into global processes than it was ten years ago. That is why the current world economic crisis may be much more painful for the country, than the crisis of 1998.

This is the majority participants opinion of "The New World Economic Setup and Impact on Ukraine" discussion, held within the Plenary Session of the 5th annual Yalta European Strategy summit.

Leshek Baltserovitch, the Head of National Bank of Poland, says Ukraine should not follow the European mistakes; it has to change its monetary regime and lessen the taxation load. "There is no need to copy Europe in what we call "a Eurosclerosis". Having such a tax pressure, it is impossible to hope for any changes. All you have to do is change the monetary regime and implement the expense reform". In his opinion, having the inflation rate of more than 10%, in the long run it is impossible to compete on the country level".

"Within the current stage of European crisis the threat for Ukraine is also great. We were quite successful in the first stage of the crisis. But at the moment the threat has increased", mentioned Petro Poroshenko, the Head of the National Bank of Ukraine, in the course of discussion.

"Should we have the same inflation rate, this will slow down the development. To fight it, the concerted action of the government and the parliament is needed. That we do not have. We have come too close to the real crisis", said Petro Poroshenko.

In his opinion, the year 2009, when not only the world oil prices, but also the Russian gas price goes up, may be the worst for Ukraine. "It is exactly where all the nation and political leaders have to be united in order to solve the problems we face in 2009", stated Petro Poroshenko.

Jean Pisani-Ferry, Bruegel Center Director, said that tying in the currency to the US Dollar comes he main peculiarity of Ukrainian financial system, which makes it quite vulnerable before the crisis. "Ukraine is the only country in the region, tied in to the US Dollar", he emphasized. By his words, only 15% of the country products had been exported and paid out for in Euro. "We have seen the positive globalization stage; now we are facing a much more difficult stage", Jean Pisani-Ferry mentioned.

As was informed, Yalta is hosting the the 5th annual summit of international Yalta European Strategy (YES) network, the greatest and the most influential non-governmental forum for Ukraine and European Union issues. More than 160 politicians, businessmen, public characters, diplomats and journalists from more than 20 countries of the world shall take part in the Summit. The Summit will continue working until July, 13. The Plenary Sessions will be traditionally held in Livadia Palace.
Among the participants of the 5th annual organization Summit are Dominique Strauss-Kahn, the Managing Director of the International Monetary Fund; Mikheil Saakashvili, the President of Georgia; Marek Siwiec, Vice President of the European Parliament; Aleksander Kwasniewski, the President of Poland in 1995-2005; Mario David, Vice-President of European People's Party; Victor Chernomyrdin, Ambassador of the Russian Federation to Ukraine; key strategists of the leading USA political parties - Karl Rove, the republican, and Bob Shrum, the democrat.
Anthony Charles Lynton "Tony" Blair, the British politician and public leader, the Prime Minister of the Great Britain in 1997-2007, will be the special guest of the Summit to speak at Vision of Europe and Ukraine Plenary Session on July, 12.
The Ukrainian state at the Summit will be presented by Arseniy Yatseniuk, the Head of Verkhovna Rada of Ukraine; Raisa Bogatyrova, the Secretary of National Security and Defence Council of Ukraine; Vice Prime Minister on European and International Integration Grygoriy Nemyria.
Yalta European Strategy (YES) is an independent international organization, uniting the famous politicians, business and public opinion leaders, and journalists, with the aim of reforming Ukraine and provision of support to its entering the European Union. The organization was created by Victor Pinchuk, Ukrainian businessman and public figure, in July, 2004.
Annual YES Summits in Yalta act as communication ground to discuss and develop political and economic strategies for Europe and Ukraine. Since the year 2004, William J. Clinton, the 42nd President of the USA; Gerhard Shroeder, the German Chancellor (1998-2005); Aleksander Kwasniewski, President of Poland (1995-2005), Victor Yushchenko, the President of Ukraine, and other personalities took part in Summits' work.