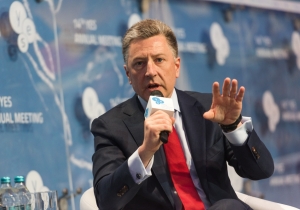 Russia’s proposals on the deployment of the UN peacekeepers mission in Donbas includes elements that are harmful to Ukraine, the US Department of State Special Envoy to the Ukraine peace talks, Kurt Volker, has said. However, these proposals may prove to be a starting point in reaching a compromise, Volker said at the 14th Annual Meeting of the Yalta European Strategy (YES), held by Victor Pinchuk Foundation.

“Specific features of what has been proposed would split Ukraine rather than produce anything useful. Nevertheless, the very fact that this proposal has been made is very interesting and it needs to be looked at. If we think of the international peace-keepers as replacement for the Russian army in terms of controlling heavy weapon and border control – this would be an essential step forward and will form the basis for implementation of the Minsk agreement”, Volker said.

Volker also warned that when progress is achieved, Ukraine will also have to be ready to implement its political commitments.

Volker revealed that he plans to have a meeting with the Russian President’s Aide, Vladislav Surkov, in October to discuss the issue of Donbas.

Former Ukrainian President (1994-05), Leonid Kuchma, for his part, warned all parties of approving dangerous and illogical decisions regarding the deployment of the peacekeeping mission.

“We want this war to be over, we all support the deployment of peacekeeping helmets, whatever color they are. But we do not support the conditions when new borders are established to separate those [separatists-held] territories from Ukraine. The Blue Helmets should protect people, but, for God’s sake, I’ve never heard of peacekeepers protecting other peacekeepers! Two cars with the OSCE mission are followed by two cars with the Blue Helmets – what is this? Does this look like protecting people or resolving the issue?", Kuchma said.

Kuchma also said it is important that the Ukraine-Russia border should be controlled by the peacekeepers if this mission is to be deployed.

“The border – a UN mission has to be there to block everything that is not supposed to come into Ukraine”, Kuchma concluded.