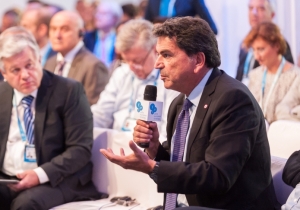 Another extension of Europe’s sanctions will not expedite Russia’s implementation of the Minsk agreements, French National Assembly Foreign Committee Member Pierre Lellouche has said at the 13th Annual Meeting of the Yalta European Strategy.

“As far as Donbass is concerned, there a process developed in Minsk, and we have to implement it. Part of the responsibility is within Russia here, there’s also a part that rests within Ukraine. France and Germany will have to ensure a timetable for Russia and Ukraine to deliver on their commitments… I do not believe that a six-months extension of sanctions brings us closer to our objective. I do not believe this is in anyone’s interests”, - Lellouche said.

Lellouche also said that it is not worthwhile to provide Ukraine with weapon.

“I’m not saying I am ready to send defense or offensive weapon to Ukraine, because this is not a problem. The problem is Ukraine’s inner stability and ability of the current government to implement reforms. I am sorry to say that, but you are not doing this, and this is the reality”, -  Lellouche said.

Ukrainian Foreign Ministry Pavlo Klimkin said for his part that Russia breaches fundamental principles of international law, it neglects peoples’ rights and freedoms, and there should be a reaction from the international society to acts like this.

“I believe in the freedom of choice and freedom of people. And I choose not to give up in front of Russia, in front of their desire to revive old agreement, the Yalta agreements or any other ones… When speaking of reforms, this is our job to make Ukraine successful. But in fact we need stability for these reforms to take roots”, - Klimkin said.