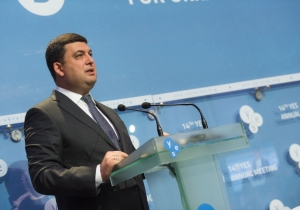 "We have the infrastructure to bring corruption down in Ukraine. We have laws which allow for effective performance. The only weakness is in the Ukrainian courts. I believe that we must quickly set up an instrument that enables the prosecution of corrupt officials. Whatever we name it – the Anticorruption Chamber or Anticorruption Court – is not important. What is important is to quickly set up a body which will be completely independent," the prime minister said.

He added that the government's main task is to ensure there is no opportunity for corruption during institutional transformation.

"Over the past year, we have undertaken a number of anticorruption measures: we have deregulated the energy sector, launched the state procurement system, ProZorro, introduced e-declaration, opened all of the databases, including on end beneficiaries, and initiated massive deregulation. Recently, we have cancelled 600 regulations which used to be the foundation of corruption," the prime minister added.

Maxim Timchenko
CEO, DTEK, 9th Yalta Annual Meeting, 2012
«I have a great belief that with the help and participation of our European partners we can overcome all obstacles and make the energy sector a real driving force for Ukraine’s integration into the EU»