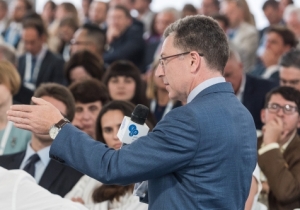 The US and Ukraine should make more effort to counter information warfare and cyberattacks, said State Department Special Representative for Ukraine, Kurt Volker at the 15th Yalta European Strategy (YES) Annual Meeting themed “The Next Generation of Everything” and organized by the Victor Pinchuk Foundation.

“Everything starts with the people’s will, and this relates also to the technologies (information warfare and cyberattacks) and their use. Decision making should be influenced in order to avoid unwanted events, and responses should be prompt and it should be done effectively. I want to say, that in this respect, we express our will in a very weak way. We have all necessary and effective tools, especially in comparison to our enemy”, he said.

In turn, the 66th U.S. Secretary of State, Condoleezza Rice agreed with the opinion that Ukraine and the US have all that is needed to organize an effective countering of information warfare and cyberattacks.

“Ukraine and the US are not helpless… We see how grave the problem is, but we do almost nothing to solve it, we are not getting prepared”, she said.

Rice reminded the audience that Russia’s first serious cyberattack on Estonia occurred more than ten years ago, however, appropriate steps have still not been taken..

“In 2007, Russia simply blocked and fully cut off Estonia. I remember President Toomas Ilves  called me and asked: “Do you realize what is happening?”. This country had always been proud of its e-governance, the whole budget being Internet based and electronic voting: this is very important. An attack on one of the NATO members is an attack on everyone. Was it an infringement of Article 5? The Bush Administration started realizing at an early stage what a digital attack could mean. We realized that it would be different from a battle ground. However, we did not know how to prevent that, nor how to respond. I think that since then, we have not advanced much, although 10 years have passed. This should
change”, the former US Secretary of State concluded.