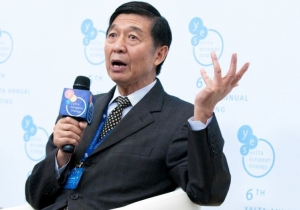 Ambassador Wu Jianmin, former Permanent Representative of China to the UN: “The present crisis brings the most dramatic changes in the world’s geopolitics in the past 400 years, shifting the global “centre of gravity” from the Atlantic to the Pacific Ocean.”

According to him the global economic crisis has extremely strengthened the global interdependency. “If in the past changes in American economy could not in any way affect China, today we all are interconnected. And no country can deal with the problems on its own”, he underlined having added that this tendency will intensify as the world in the 21st century will go through three revolutions – energy, industry and lifestyle revolutions.”

Ambassador Wu Jianmin has reminded that today, nearly half the planet’s population resides in developing countries. Therefore, mono-polar and one sided international policy is unable to resolve issues faced by the civilization. “The Bush administration believed that it would cope with all problems on its own. But it wasn’t so. One sided policy failed”, he stated, saying that the crisis accelerates convergence processes in the modern world. “If in the past decisions were made by G-7 or G-8, now they are made by G-20”

According to Wu Jianmin, the world’s fate in the 21st century will be determined by the conflict of two tendencies. “The first is peace, cooperation and development. The second is “cold war” and conflict. China stands for the first one.” He continues: “The English word “harmony” means that all play by the same rules. The Chinese word “harmony” means diversity. For us it signifies that all countries must respect each other politically and build relations on the grounds of equality.”

“China professes a strategy of peaceful development based on three theses: we are against expansion, we are against hegemony and we are against alliances”, he added and reminded that during the Russia-Georgia conflict China didn’t take anyone’s side. “ If we had taken anyone’s side, the catastrophe could have been greater, all would have lost. ”