US policy in relation to Ukraine shall not change substantially after November elections, say YES summit discussion participants 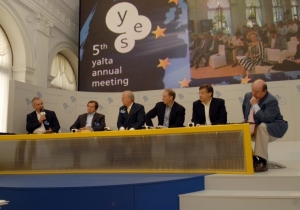 The US policy in relation to Ukraine shall hardly undergo substantial changes after this year's upcoming November presidential elections. The candidates have similar strategies with the key element of supporting Ukraine's Euro-Atlantic integration.

The difference between Bush and McCain will mostly concern the approaches and methods their administrations are going to use in realization of US external policy in the region, if they won. These are the results of "Elections in Russia and the USA: impact on Ukraine and Europe" discussion, held within the Plenary Session of the 5th annual summit of Yalta European Strategy on the Saturday morning.

In the opinion of Karl Rove, the key strategist of US Republican party election campaigns, Senator John McCain, the Republican candidate for Presidency, "knows this part of the world in a good way, he has been visiting the region quite often and has even spent his vacation in Georgia once. He knows the specificities of Ukraine and is aware of its geopolitical role. Suffice it will be to say that his US External Policy Principles Article has seven words that Barack Obama does not have, and one of the words is Ukraine".

McCain is quite skeptical in relation to Russia and its leadership in the region; his priorities are NATO expansion, development of relations with European Union and building "the line of democracy" with Ukraine and Georgia to become the key elements of it, mentioned Karl Rove. He made an emphasis on the fact that one of the main McCain's peculiarities is his support of the established free trade regime between USA and other countries. "McCain voted for free trade regime, meanwhile Obama was always against it; and that is the great difference between them", mentioned the Republicans' strategists.

Alongside with this, Karl Rove has admitted that there is no much difference between the candidates in the sphere of external policy, especially in relation to Ukraine. "Both candidates stand for NATO expansion; both stand for Ukraine to make steps in that direction".

Bob Shrum, the chief political consultant of the Democratic Party and the architect of the last seven democratic election campaigns, noted that, although Ukraine is not mentioned in Obama's articles, the country finds its place in his policy. In terms of external policy, the expert sees its methods of realization as the main difference between the candidates. "Obama has more belief in negotiations with everybody, even with Iran. Although, his openness cannot be called mildness. McCain is skeptical about negotiations and sticks to the point that the United States should not hold negotiations with some of the countries. Even when the administration of George Bush stood for negotiations with Korea in relation to its nuclear program, McCain has been strictly criticizing Bush for that". As an example, Shrum mentioned the fact that McCain proposes to exclude Russian Federation from The Group of Eight Organization.

Political consultant of the Democrats emphasized that Obama does not want "to force Ukraine into position of choosing between Russia and the United States. Should McCain become the President, my idea is that in this part of the world the situation becomes more complicated and tense", he said. The main Obama's advantage is that people are expecting changes in internal and external policy of the USA. "It will not be just a new administration; there will be new relations", he said.

Kostyantyn Hryshchenko, the Ambassador of Ukraine to Russia and the Deputy Secretary of the National Security and Defense Council, taking part in the discussion, has mentioned that it is American nation to decide who is going to be the US President. "Still, the only thing that matters for Ukraine is not to stay beyond debates on the issue of external policy in the new US administration. Ukraine should be in the center of discussion about the situation in the region, especially in USA-Russia-Ukraine triangle", he said.

As informed, Yalta is hosting the the 5th annual summit of international Yalta European Strategy (YES) network, the greatest and the most influential non-governmental forum for Ukraine and European Union issues. More than 160 politicians, businessmen, public characters, diplomats and journalists from more than 20 countries of the world shall take part in the Summit. The Summit will continue working until July, 13. The Plenary Sessions will be traditionally held in Livadia Palace.
Among the participants of the 5th annual organization Summit are Dominique Strauss-Kahn, the Managing Director of the International Monetary Fund; Mikheil Saakashvili, the President of Georgia; Marek Siwiec, Vice President of the European Parliament; Aleksander Kwasniewski, the President of Poland in 1995-2005; Mario David, Vice-President of European People's Party; Victor Chernomyrdin, Ambassador of the Russian Federation to Ukraine; key strategists of the leading USA political parties - Karl Rove, the republican, and Bob Shrum, the democrat.
Anthony Charles Lynton "Tony" Blair, the British politician and public leader, the Prime Minister of the Great Britain in 1997-2007, will be the special guest of the Summit to speak at Vision of Europe and Ukraine Plenary Session on July, 12.
The Ukrainian state at the Summit will be presented by Arseniy Yatseniuk, the Head of Verkhovna Rada of Ukraine; Raisa Bogatyrova, the Secretary of National Security and Defence Council of Ukraine; Vice Prime Minister on European and International Integration Grygoriy Nemyria.