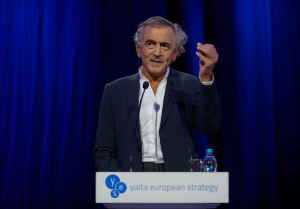 The pursuit of happiness remains at the heart of the greatest shifts in human history – says philosopher and writer Bernard-Henri Levy.

“Let us talk about the most significant historical events. The great invention of Greek democracy aspired after happiness. The rise of Christianity was all about the desire for blessing and happiness. The American Revolution and the adoption of the Declaration of Independence of 1776 aimed at the set-up of constitutional rights and the right to happiness. The French Revolution – which became the major event in two and a half thousand years – is happiness as a new idea for Europe,” he said at the opening of the 16th Yalta European Strategy (YES) Annual Meeting, “Happiness Now. New Approaches for a World in Crisis”, organized by the Victor Pinchuk Foundation.

Bernard-Henri Levy added that despite that, many people all over the world still believe the politicians’ and governments’ task to be anything but human happiness. “In fact, there are no legitimate goals for a politician other than to provide freedom and an opportunity for people to become happier,” the philosopher summed up.