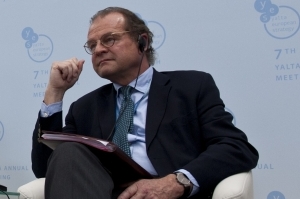 Global economy emerges from the crisis. But at the same time there is a rise of competition level for financial recourses in the world, which can be won only by the states that are developing most dynamically.

This is the opinion expressed at the 7th YES Yalta Forum by Olivier Descamps, EBRD’s Managing Director on Turkey, Eastern Europe, Caucasus and Central Asia.

“We understand that we are coming out of the crisis, - he underlined. – Although the growth is not obvious enough as there has been a change of rules in the world economy”.

In his opinion, the level of competition for investments will only be increasing after the crisis. “Every government will have to re-brand its country to make it more inviting for capital investments. There must be better investment climate. Investors are human beings, and human beings learn from their mistakes. Today they must be wiser, more cautious and able to spread the risks accurately. Money and investments choose the most competitive countries”, stated Descamps. And countries must convince investors of being worth of their attention.

"Of course, it is easier for the countries with the largest resources to remain attractive. But those reforming themselves at a more dynamic rate also have a fair chance", - he added, taking Turkey as an example, where government implemented necessary reforms and made a serious bid to attract investments.