Obama to catch on the rebounds of Russia and stabilize the situation in Ukraine, - Niall Ferguson 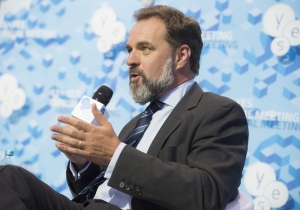 President of the United States Barak Obama is to pay attention to the potential to catch on relative weakness of the Russian stand to stabilize the situation in Ukraine. The USA have to take urgent military measures to discourage the Russian Federation from continuing the escalation of the conflict in Ukraine. Harvard University History Professor Niall Ferguson expressed this idea at the session “Friends, Enemies, Alliances of the Future. Who with Whom against Whom?” at 11th Annual Meetings of the Yalta European Strategy (YES) on Friday in Kyiv.

“The USA could have taken urgent military actions to discourage Russia. There were opportunities in the Black Sea, naval, and in the Baltic region, but President Obama decided not to use them… And this was the worst scenario for the West which enabled the annexation of the Crimea and rendered the Budapest Memorandum impossible. I am
trying to say that the Russian stand was weak and we have not used that weakness … Obama is better to catch on the rebounds of Russian position in order to stabilize the situation in Ukraine”, Ferguson said. According to the Professor, President Obama made a mistake declaring that the USA “are no longer acting like a world’s policeman, and the Russians have reached their own conclusions”.
Another panelist Joschka Fischer, Minister of Foreign Affairs and Vice Chancellor of Germany (1998-2005), declared that the USA would not always stay close when Europe needs them.
Ronnie C. Chan, Chairman of Hang Lung Properties Ltd. also took part in this session and recommended the Europeans to learn the Asian philosophy of world perception as the things do not divide into black and white only. Chan also recommended Ukraine to be very careful in choosing the party to join: “If you are sure that one of the parties would defend you, than surely take that side, however, if you are not sure, think and think it over again. Is the USA a big brother you can trust or is the EU a big brother you can trust?”