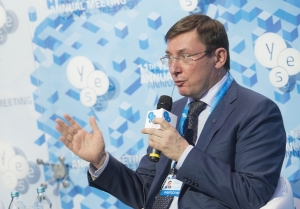 The new Parliament of Ukraine will have to use the pause in the Russia-Ukraine conflict in Donbas to raise foreign investment, to fight against corruption and to modernize the army, stated Yuriy Lutsenko, Advisor to the President of Ukraine – Head of the “Bloc of Petro Poroshenko” Party at the session “Parliamentary Elections: Breakthrough or Entrenchment of the Old?” at 11th annual meeting of Yalta European Strategy (YES) on Saturday in Kyiv.

Lutsenko believes that the Minsk protocol does not mean peace, it is a chance for peace, the opportunity to shift from military confrontation with the Kremlin to economic one.

“Most likely, the Minsk protocol is a pause. The question is how we will use this pause in the Parliament. Yes. As this is the Parliament that adopts the rules. What do we need to defend Ukraine? To modernize our army. The Ukrainian Parliament should do this. We should defend our country investing several dozen billions. We are to ensure such fight against corruption, such market laws, such reduction of the excessive administrative apparatus, that would enable lots of foreign investments to inflow fast”, - said the Head of the “Bloc of Petro Poroshenko” Party. According to Lutsenko, another thing to be ensured in the Parliament is the unity of Ukrainian people in their diversity.

The politician added that the Ukrainian democratic forces now are negotiating the issue that the new Verkhovna Rada should have people from Maydan parties and should not have the fifth column from the Kremlin.

Lutsenko believes that the RF President Vladimir Putin needs the entire Ukraine: “Ukraine is the horror for the Kremlin since it can demonstrate that the fraternal, neighboring, Slavic people may live better under the European standards than in that paradigm - we have been held in the Asian captive for 300 years”.

Another panelist – Anatoliy Grytsenko, Member of the Parliament of Ukraine, Head of the “Civic Position” Party – stated Ukraine has not used its potential in full to overcome the military aggression of Russia. “There is no diplomatic solution. If we have the aggression, if we indeed have a profound conviction that this is our country, our integrity, our freedom, than we should fight. The diplomatic efforts could have been stronger if they had been supported by military resistance. Ukraine? What sanctions have we imposed? Has Ukraine involved its potential to stop the aggression? My answer is No. We have engaged no more than 30%”, - Grytsenko believes.

Liashko also believes that the newly elected Parliament would cancel the parliamentary immunity: “I have no doubts.”