Niall Ferguson: the key to personal happiness is in the hands of individuals 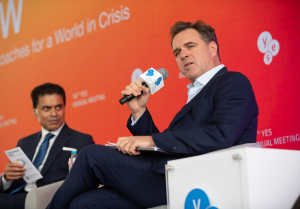 "In the 21st century it is a mistake to believe that the government can ensure people's happiness. This is a great illusion, and I would urge this conference not to come to the conclusion that it is a government’s task to make people happy. You, and only you, can achieve happiness for yourself, no-one else can do it for you," he said, whilst addressing the 16th Yalta European Strategy (YES) Annual Meeting "Happiness Now. New Approaches for a World in Crisis", organised by the Victor Pinchuk Foundation.

Ferguson warned politicians against trying to legislate to make people happy, using the examples of Zamyatin, Huxley and the USSR to show that trying this is likely to result in the emergence of a closed totalitarian society.

"The pursuit of happiness as government policy ends in oppression or subjugation - we should not forget this lesson. When you expect the government to make you happy, you begin to quickly lose freedom. This is the main lesson of the mid-20th century," he concluded.