Young people should come to power, not just “stir up unrest” - Mikheil Saakashvili 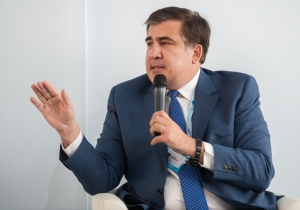 Young people in Ukraine should move from “stirring up unrest” to taking responsibility for passing government decisions, the head of the Odessa state regional administration, Mikheil Saakashvili, said at the 13th Annual Meeting of the Yalta European Strategy (YES).

“There are young people who should make the shift from ‘stirring up unrest’ to producing solutions. These people do not want the old system to return but they do not pass any decisions now either. New elections, regardless of their outcome, will bring new people to power,” he said.“Ukraine is disappointed with its elite because it has not been developing. Ukraine is at war with Russia but, in my opinion, the Ukrainian elite mostly share the same values as those in Russia. They have very little in common with Europeans and Americans. They have the same mansions in Koncha-Zaspa as Russians do in Rublevka,” Saakashvili said.Ukrainian Prosecutor-General, Yuriy Lutsenko, suggested that young MPs, who were recently elected to parliament, should be more proactive in drafting the legislation.According to him, the Prosecutor-General’s Office is currently renewing its staff.“Out of my five deputies, three are under 35 and have never worked in prosecution. Open competitions are currently being held to Western standards to replace one in three local prosecutors. This means that people from outside the system are beginning to be involved. If we stop dividing ourselves into young angels and old demons, everything will be fine,” he concluded.