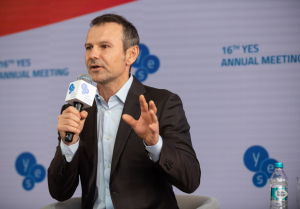 “The success and prosperity of a state does not depend on political personalities, but on the quality and strength of its institutions,” said MP Sviatoslav Vakarchuk as he took part in a panel on ‘Ukraine’s New Political Face’, at the 16th Annual Meeting of the Yalta European Strategy (YES) “Happiness Now. New Approaches for a World in Crisis” organised by the Victor Pinchuk Foundation.

“If you look at Western countries, which, in my opinion, are an example to follow and a goal to pursue – they all have a common feature. They have institutions that can outlast any political leader, no matter how strong or weak, popular or unpopular he or she may be,” the MP said.

This belief in creating strong public institutions was also supported by MP Ivan Krulko who said,

"The key thing to remember is that when a certain personality or party is in power, they need to design the rules of the game they want to be applied to themselves later on, when they are in opposition. I believe this formula to be the most effective for any democracy, especially for a young one,” he concluded.