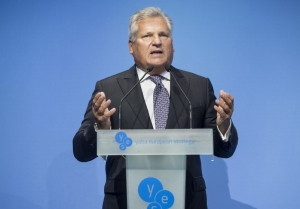 The 12th Yalta European Strategy (YES) Annual Meeting entitled “At Risk: How New Ukraine’s Fate Affects Europe and the World,” organized by YES, in partnership with the Victor Pinchuk Foundation, opened today in Kyiv, bringing together more than 350 global leaders from politics, business, society and media from more than 20 countries to discuss new Ukraine’s impact on Europe and the world.

The conference opened with remarks by Aleksander Kwasniewski, President of Poland (1995-2005) and Chairman of the Board of YES, who called on the public, politicians and intellectuals around the world to join efforts to “find the right path for Ukraine and to look for solutions, which exist even in the most difficult of situations.”

Kwasniewski added, "We know that Ukraine is the country the situation in which will have an effect on the situation in the region, Europe and the world. We know what a complicated and heavy situation it is. We have many questions and not so many answers. I think our role today is to join all our intellectual efforts to motivate politicians and society to follow the path which we will be discussing tomorrow and the day after. [We need] to show that even in this difficult situation it is possible to look for solutions," he said.

The 12th YES Forum will concentrate on determining how Ukraine can become a force for global stability and European values in today’s volatile global context, building on the revolution of dignity, and addressing the challenges that arose from the annexation of Crimea, the conflict in the East, and the urgent need to reform the country’s financial, economic, legal and security sector. The full agenda for the conference and a live feed can be seen at www.yes-ukraine.org.