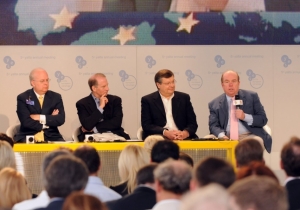 Such opinion has been stated by the participants of "The Future of the European Union" discussion, held within the Plenary Session of the 5th annual Yalta European Strategy summit.

Aleksander Kwasniewski, the President of Poland in 1995-2005, thinks the institutional problems within EU in relation to Ireland's refusal to ratify the Lisbon treaty are not a new phenomenon and not able to tear up the foundations of European unity. "Europe has its problems, but as well Europe has many chances as well", he mentioned.

Ex-President of Poland does not agree on the opinion that European Union is experiencing crisis. For Ukraine, it is exactly European integration that is viewed as the most attractive variant today. "We may respect Russia for its good economical performance, but the country also has problems with freedom of democratic institutions, as well as with migration and other things. I want to say that European Union is a very interesting organization for Ukraine".

According to European politicians' opinion, after implementing the necessary reforms Ukraine may become the EU member, since European Union should not isolate itself within the present borders. "We do not need the new demarcation lines within Europe", emphasized Mikulas Dzurinda, Prime Minister of Slovakia in 1998-2006. "We need a closer cooperation in the security sphere, we need more reforms. The more reforms Ukraine implements, the sooner it becomes the EU member".

←Back to news list
Salman Khan
Founder and Executive Director, Khan Academy (via TV link), 9th YES Annual Meeting, 2012
«We can move to a reality where we can start to rethink this Industrial Revolution-inspired model of education that we all grew up in»