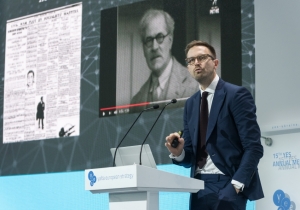 “The genie was let out of the bottle. I think technologies will be improving and no government will be able to control it. Instead, it’s better to focus on solutions mitigating the effect of this type of disinformation. It is necessary to help people to perceive political context.In this context, a website can be created where anyone can make video with historical figures saying whatever a user wants them to. For instance: Margaret Thatcher greeting the user’s daughter on her birthday”, John Gibson said.

According to the ASI Data Science Director, deep fake technologies are still far from perfect, however, they are developing rapidly.

“I think it would be right to assume that video synthesis of this type will be easily available as early as in a few years from now, and any technically skilled person can create a politician. And any politician, who realized he said something wrong, would claim it were an algorithm, - Gibson said.

Gibson was also certain that this technology will be made accessible to general public, it not strictly reserved for the sole use of large corporations or military programs.