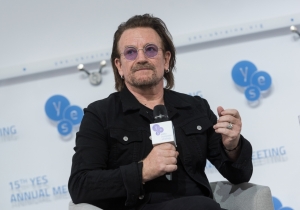 Corruption destroys developing regions: Europe should pay more attention to solve this problem [corruption], said U2 frontman, Bono, at the 15th Yalta European Strategy (YES) Annual Meeting themed “The Next Generation of Everything” and organized by the Victor Pinchuk Foundation.

“Corruption kills more people in Africa than HIV/AIDS or malaria. But there is a vaccine against that: it is called transparency, open governance and civil society”, Bono said.

The U2 lead singer highlighted the important role of new technologies in fighting corruption.

“ІТ provide conditions that make it hard to hide corruption. This is why I am passionate about this youth movement: this makes hiding more and more difficult “, he said.