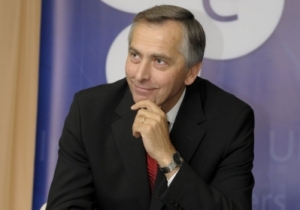 The 2nd YES University is one of the largest annual fora of the young political leaders of Europe which is to be held in Kyiv for the second time on October 2-4, 2008. YES University is the project of the international network Yalta European Strategy (YES) which mission is to maintain dialogue between the various political movements in Europe and Ukraine and to promote contacts between the future political leaders of Ukraine and EU members.

The event will bring together about 180 representatives of the youth organizations of three leading political forces of Europe from 28 countries - European People's Party, European socialists and liberals and the young leaders of Ukraine.

Among the participants of the 2nd YES University are Mr. Marek Siviec, Vice President of the European Parliament, Alexandr Kwasniewski, President of Poland (1995 - 2005); Mr. Adrian Severin, Chairman of Interparliamentary Committee of Ukraine-EU Cooperation; Mr. Charles Tennok, Vice Chairman of Delegation of Interparliamentary Committee of Ukraine-EU Cooperation; Mrs. Nino Burdzhanadze, Chair of the Parliament of Georgia (2001-2008); Mr. Sergey Glazyev, Director of the New Economy Institute of the State Administration University of Russian Federation and Member of the State Duma of Russian Federation of the 1st (1994-1995) and the 3rd (2000-2003) convocations; Mr. Arseniy Yatsenyuk, Chairman of Verkhovna Rada of Ukraine; Mr. Hryhoriy Nemyrya, Vice Prime Minister of Ukraine for European Integration; and Mr. Anatoliy Hritsenko, the People's Deputy of Ukraine.