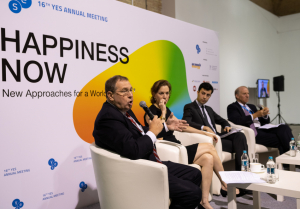 The perception of collective happiness is not typical to Russians, argued Andrey Illarionov, Senior Fellow at the Cato Institute at the 16th Yalta European Strategy (YES) Annual Meeting "Happiness Now. New Approaches for a World in Crisis", organised by the Victor Pinchuk Foundation.

"It is a myth that Russia is a collective society. Russia is one of the biggest societies made up of individuals." he said.

In Illarionov's opinion, the high level of individualism and the lack of trust in Russian society pose obstacles to collaboration as a population. "People cannot imagine uniting to work on different tasks and goals." he added.

The Washington Post columnist, Anne Applebaum, suggested that in fact Russian society is in many ways similar to that of China, in particular where they rely on collective, mass joy. "What Russia and China have in common is that both governments are building a society where there is no space for the concept of individualism," she said.

Illarionov argued that the concept of group, national and civic happiness is erroneous altogether. "This is only the fruit of one's imagination. Happiness is absolutely subjective, individual and personalised," he insisted.