Kofi Annan: Everyone to Take Part in Struggle against Climate Change 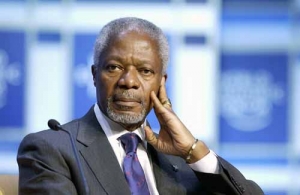 Climate change is a global problem which may affect any country in any moment. We have not managed to reach effective agreement on joint actions yet.

However, it is still possible to join efforts on a global basis. Koffi Annan, the UN Secretary General, claimed this in the course of 7th YES Yalta Forum Teleconference Geneva-Yalta.

“The ecology issue is not that one which should separate the countries and governments”, - he emphasized, having noted that it is necessary to keep seeking for a mechanism which would allow to reach agreement on the actions as regards prevention from climate changes on a global basis. According to ex-UN Chief, the existing UN mechanisms where the decisions are taken by consensus are not effective enough in solving these tasks. The “G-7” or “G-20” mechanisms are imperfect either since within their framework the opinions of many Asian and African countries, suffering the climate change most of all, are not taken into account. That is why Kofi Annan has proposed a mechanism of “small groups”.

“I do not think that there should be a small group which somehow represents the interests of all countries. It may consist of 25-30 countries representing all the groups of interests. The group may reach agreement and submit its joint project for approval by all 192 countries”, - Kofi Annan noted.